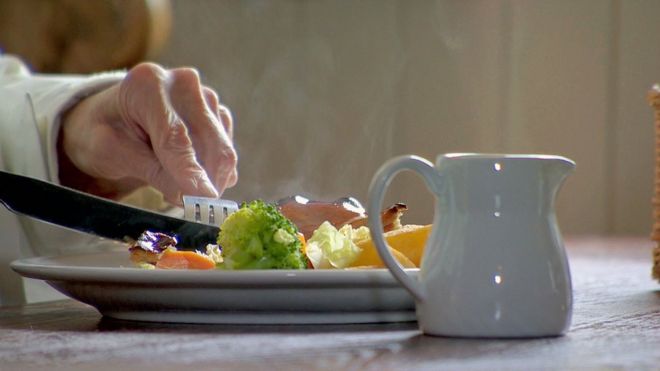 It’s lunchtime at the Harrington Arms in Cheshire. Sitting cosily in the window of the former 18th Century farmhouse, two customers have opted to share their piping hot portion of turkey and ham pie.

Without quite realising it, they’re choosing to do exactly what food waste campaigners want us all to do: only get served up what we’ll definitely eat.

Over a million tonnes of food prepared in the hospitality industry gets thrown away. And charity Wrap says 75% of it could have been eaten.

This older pair’s concerns are more about appetite than the environment: “We don’t eat as much as we used to and we don’t want to waste anything,” they smile, delighted that the pub has kindly given them extra gravy to help spread their shared meal.

But back in the kitchen, there’s a deliberate effort to reduce what’s served to reduce waste and save cash. Portion sizes are down. Garnishes and sauces are optional extras. Lined up by the sink are plates scraped clean by happy eaters.

The Harrington Arms is one of over 240 Robinsons Brewery pubs to take on new guidelines from Wrap; making some small changes after monitoring and measuring what gets rejected.

The charity has the backing of some big-name chefs and chains, as well as the Government. But it’s tricky when companies have an obligation to serve up crowd-pleasing grub.

On average about a fifth of food binned across industry is spoiled, damaged or past its best. Almost half gets the chop as it’s prepped. And a third is our fault – plate waste sent back when someone cannot manage it. Salad, spuds and rice are the most over-served offenders.

Robinsons Brewery estimates £8,000 worth of food is wasted in each pub and maintains customers have been supportive of the cuts. “A lot of licensees seem to think that the bigger the portion – the happier the customer. But it’s not always the case,” says Nick Burns, who consults on the catering across the brewery’s network.

“Adding that salad garnish, which may cost 30 or 40p, to the plate makes it look better but if the customer is not eating it, it’s waste,”

Eleanor Morris has worked on Wrap’s Guardians of Grub campaign that challenges businesses of all kinds to rethink how they procure, prep and present food. “Business food waste is hidden; it goes into a bin and gets taken away, so it’s not really seen as a cost,” she says.

It’s not a new idea. Zero Waste Scotland’s trial to tackle 53,000 tonnes of scraps began five years ago. The trial focused on giving out doggy bags for customers to take home their leftovers – something Angela Loftus and the team at Black Sheep Bistro in Glasgow are still keenly offering as part of their commitment to reduce stigma and boost sustainability.

“If a plate comes back to the kitchen and staff are saying it’s being boxed up, I feel happy about that, because I know the person enjoyed it,” she says.

“If customers see this is the norm in here then they feel more comfortable about it and they can just carry home our nice wee bag with them. It makes it look like it’s the right thing to do.”

All of the ideas to reduce waste rely upon dialogue between business and customer – about what will be dished out in exchange for their cash. A meal out is still a treat for most people. Diners will only really swallow changes if they feel like they’re still being offered good value for money.